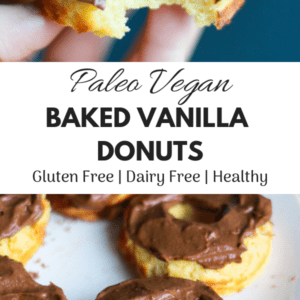 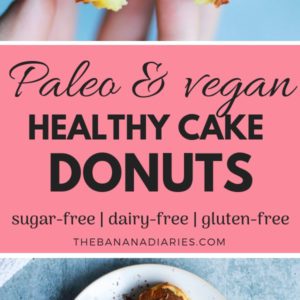 These baked vegan cake donuts seriously stole my heart. They’re completely gluten free, paleo, and don’t contain topped with a dairy free, vegan chocolate icing that is just out of this world delicious. You could even eat the icing with a spoon, it’s that good! But back to these donuts: they’re the perfect consistency of airy and moist with a beautiful hint of vanilla and sweetness without any added sugar!

I’m actually quite proud of myself, considering I’m not the world’s best vegan baker. I’m not quite sure what magic happened in the oven while I was baking these baked vegan donuts, but they some how turned out perfectly cake-y, perfectly airy, and so deliciously sweet without any eggs, butter, or milk! They’re also completely paleo, so that means that these baked vegan cake donuts are also gluten free 🙂

I’m sure you’re probably wondering what’s actually in these baked vegan cake donuts, so let’s get to it!

Well, ladies and gentlemen, we have another sweet potato recipe on our hands! Are you sick of them yet? 😉 In all honesty, the Japanese sweet potato just provides the perfect base for any baked goods recipe and allows the recipe to be paleo without a bunch of flours that most of America doesn’t actually buy.

Yes, I do love those flours, like cassava, and tiger nut, and almond, etc, but I also understand that it’s not something to go cold turkey on! So I figure, sweet potato is a pretty innocuous ingredient that most people know, so why not use that to bridge the gap?! 😉

Anyways! So yes, sweet potato is the biggest ingredient in this recipe!

Next we have the chia and or flax egg! You heard me right at the beginning, these are baked vegan cake donuts! So to replace the egg, I mixed about three tablespoon of ground chia or flax seed with about five tablespoons of water. When you let the mixture sit, it thickens up to be like the consistency of an egg white. This helps the donuts stick together and produce that cake-like texture without regular flour.

The next big ingredient for these baked vegan cake donuts is coconut flour. You don’t need too much here, since the sweet potato is really moist and it’s really to just absorb some of that moisture from the sweet potato!

Then we have the spices: cinnamon, vanilla, and sea salt!

Now with sweet potato, it can sometimes take a bit longer to bake and become airy. The sweet potato is already cooked once it’s in the batter. However, it needs time to combine and airate with the other ingredients! I gave my donuts about 35 minutes in the oven, and they were lightly golden on top. Then I allowed them to fully cool before taking them out of the pan- you don’t want a broken donut before you frost it!

And then while you’re baking the donuts, you can prep the chocolate frosting glaze! Now, for this recipe, I used my chocolate avocado mousse that I shared in my easy Paleo Chocolate Cupcakes recipe! It’s super simple.

All you need is cacao powder, avocado, and a little almond or coconut milk! You can add in stevia or maple syrup, like the recipe calls for, for a little sweetness too 😉 I used a food processor to puree it until it’s completely smooth. It will give you the best results!

Now I wanted to talk to you about the biggest debate of the century.

Is it donut or doughnut?!

So the official dictionary word is doughnut, which originated from the 1800’s, but the Americanized version of the word is in fact: donut.

But you probably won’t find the word donut in any fancy European cafe or patisserie so keep on the look out for doughnut! For the sake of this recipe, since we are in America and these baked vegan cake donuts are far from the ingredients of a traditional doughnut (but I’ll bet you they taste just as good, if not better!), we shall be using the word donut!

Phewf, I’m glad we got that settled! I feel a lot better, don’t you? Haha!

I don’t know about you, but I truly love all things vanilla. That’s why I went for vanilla baked vegan cake donuts rather than chocolate. Chocolate is great and all (I mean, I use it for the frosting, so no hate there!), but vanilla is just the true winner for me. It’s the foundation of every flavor and it can stand on its own! I mean, it’s a pretty strong and amazing flavor.

If you use vanilla bean instead of vanilla extract, you can also get those nice little flecks of vanilla seeds in there! I always love that look, and the flavor is even better that way. Plus it has a really nice sweetness to it that I really believe is the reason why you can have these donuts and not need to add maple syrup or any other sweetener to the mix. Although, if you’re like my mom, best to just go ahead and add the sugar in because she likes it really sweet!

These baked vegan cake donuts are truly perfect for breakfast, dessert, or an anytime snack! They go perfectly with a warm cup of coffee or cocoa 🙂 I bet they would even taste great with a big scoop of coffee or chocolate ice cream on top!