The easiest apple crisp ever

Once September rolls around, my mind has already shifted to dreaming about all the healthy apple dessert recipes I want to make.

Of course, an undetectably healthy apple crisp is top of my list, especially after a trip to the apple orchard!

This is is THE apple crisp recipe to make. Like above all healthy apple recipes out there (okay maybe not alllll of them, because I do have a pretty awesome apple pie recipe), this crisp is the best.

Filled with caramelized thinly sliced apples (repeat: thinly sliced!), coated in a sweet cinnamon, and topped with a sweet and crispy healthy oat crumble topping that just makes you swoon.

And yet it’s entirely vegan, gluten free, dairy free, and nut free, making it a perfect recipe for those who need food to be free of the Top 8 Allergens.

I know this for a fact because as I tested this final round, my sister was visiting and before she even asked what it was, she took a bite.

And then another. And another, until she finally asked, “Is this one going on your blog?! Because this is amazing.”

That’s how I knew I wasn’t crazy for thinking this apple crisp is undetectably vegan, gluten free, dairy free, and barely sweetened with a little natural sugar (maple syrup, aka liquid gold).

What’s the difference between a crisp, crumble, and cobbler?

So with many making crisps, cobblers, and crumbles right now, you might be wondering what the heck is the difference between them all.

I know I did, at least! So let’s break it down:

A cobbler is typically more like a biscuit on top of a filling. It’s made with flour, a fat (like coconut oil or vegan butter), a sweetener, and water. You can check it out here on my Paleo Vegan Blueberry Cobbler.

A crumble is very similar to a crisp, but it actually typically doesn’t have any oats in it. The crumble consistency is made from a combination of sugar, flour, and coconut oil, plus a little bit of cinnamon if you’re going for a more streusel topping. If it does have oats, the ratio has more flour than oats. You can check out a crumble topping on my Blueberry Crumble Bars and my Apple Crumble Cake.

A crisp is made from oats, flour, coconut oil, and sugar, but with more oats than flour, if at all. Now the reason why it’s called a crisp is because when baked, the topping gets nice and crunchy, whereas a crumble is much softer.

Of course, the example of this on the blog is this healthy apple crisp!

Now that you have the rundown on crisps, crumbles, and cobblers, (insert The Office’s Jim and Charles meme here), let’s make this healthy apple treat!

How to make a healthy apple crisp

This healthy apple crisp is very minimal in terms of both ingredients and equipment needed. For the ingredients, you’ll need:

As you can see, this is an entirely gluten free and vegan apple crisp! Absolutely zero butter, dairy, or the like going in this crisp recipe.

In terms of equipment, you will need to skin the apples, or else the skin will prevent the apples from caramelizing together. Since this is a no sugar added crisp filling, we’ll need to give the apples the best chance to caramelize!

How to make a no sugar added apple crisp filling

Start with greasing the skillet with some coconut oil, then tossing the thinly sliced apples together with some cinnamon and lemon juice. Set this aside while you make the crisp.

Pour the apple slices into the skillet and set aside while you make the healthy oat crumble topping!

How to make a healthy oat crumble topping

To make the healthy crumble topping that goes onto this shockingly healthy apple crisp recipe, whisk together the oats, flour, spices, and nuts. Add in the melted coconut oil and maple syrup, and combine until it’s a wet and thick batter.

Then top the apples with the cinnamon nut crumble. Place into the oven, covered with some tin foil for the start, to bake.

Once it’s done, remove it from the oven with an oven mitt and let it cool for a few minutes before topping with some vegan vanilla ice cream and diving in!

Do I really need to remove the the apple skin for an apple crisp?

If you don’t remove the apple skin, the apples won’t create that gooey caramelized texture that you think of with an apple crisp.

I want you to have the absolute best experience making this vegan apple crisp, so be sure to not skip this step!

Notes about this vegan apple crisp:

I know that a few will always need to swap out ingredients because sometimes we don’t have everything on hand or can’t consume something due to an allergy.

So let’s go over it all right here in my tips and tricks for making this the best apple crisp recipe you’ll ever eat!

How to store apple crisp

If you have any leftovers of your crisp, not a problem.

Simply store the remaining crisp in a large airtight container in the fridge.

This apple crisp will last for about a week in the fridge. To reheat, simply scoop your desired amount onto a piece of aluminum foil, and heat it in the oven for 5 minutes at 350F.

There you have it! An easy, and surprisingly vegan apple crisp (but don’t let that scare you!).

And if you’re into the vegan pranks, like I am, don’t tell anyone this is healthy and just watch their reactions!

I promise you, they’ll all be floored when you tell them that this undetectably healthy apple crisp recipe is gluten free, dairy free, vegan, and contains only 1/4 cup of added yet natural sugar!

You’re going to be the talk of the holiday table, my friend 😉 Make sure you’re prepared for alllll the attention you’re going to get!

If you give this apple crisp a go, let me know what you think in the comments below! As always, I’d absolutely love to see your beautiful recreations on Instagram and Pinterest, so be sure to tag me there! 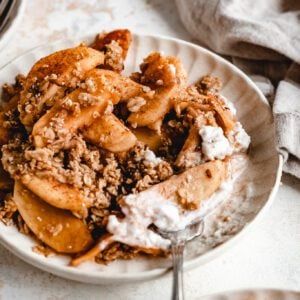 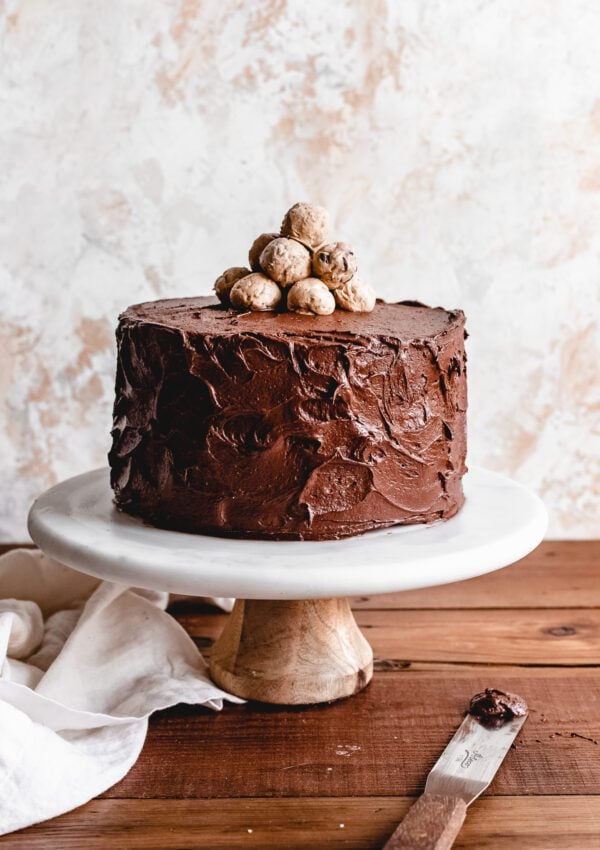 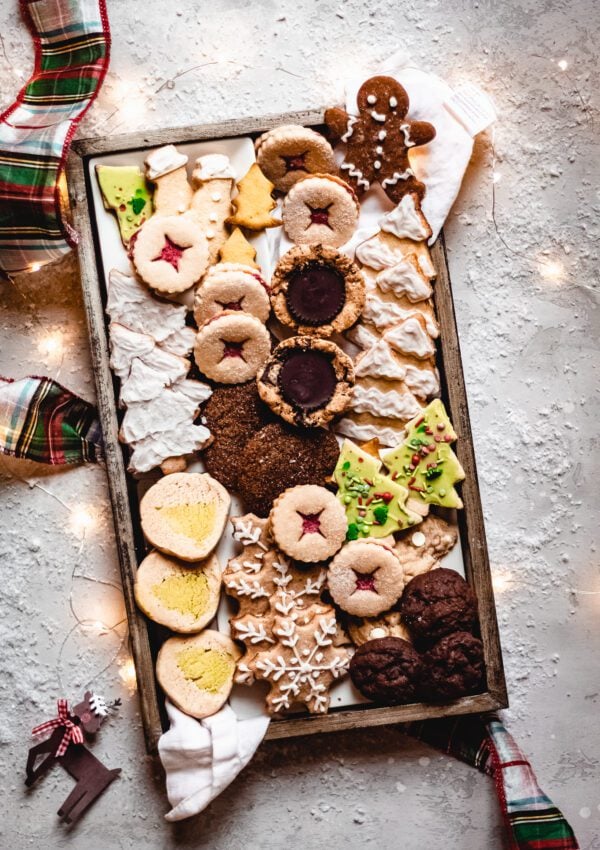 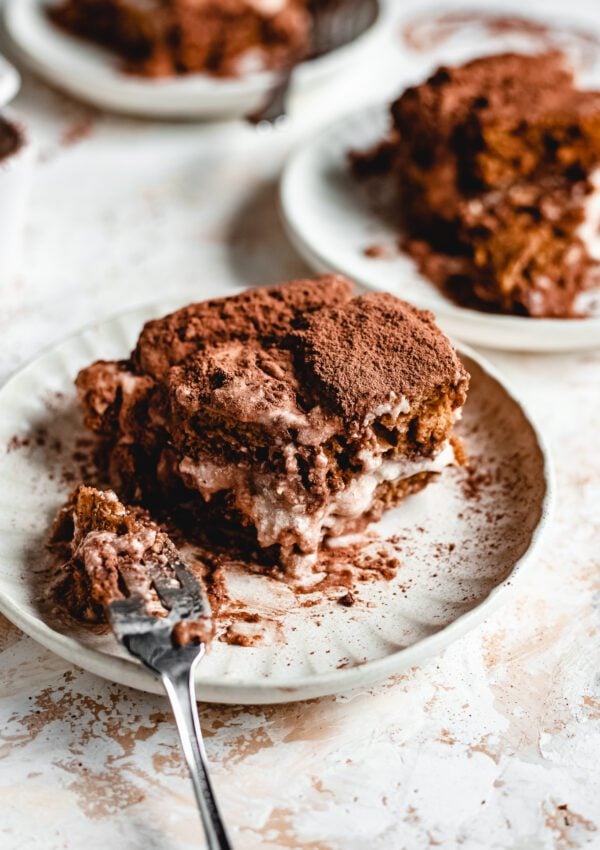 Vegan Tiramisu (No Cashews, No Tofu!) 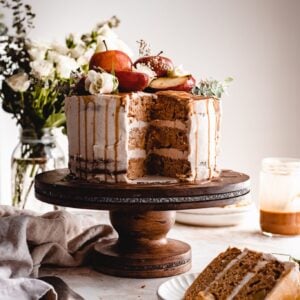