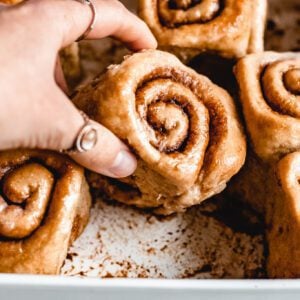 You won’t believe that these are vegan cinnamon rolls! Easy to make with an overnight option,  they’re the perfect healthy treat for any weekend breakfast!

If making a day ahead of time, complete Step 10 through the second rise, then cover the cinnamon rolls and place them in the fridge overnight. When ready to bake, allow the rolls to sit in the oven (not started) with the light on for 20-25 minutes. Then, remove the rolls from the oven, and allow the cinnamon rolls to rest over or by the oven as it preheats.