All of that, and you still get decadent, rich, fudgy, and irresistible peanut butter brownies?

You bet 😉 I have a few tricks up my sleeves for some culinary magic, and I’m about to show you!

Are you ready for your chocolate world to just be blown away?

What makes these gluten free peanut butter brownies but not Paleo?

So these are in fact a riff off of my favorite Paleo sweet potato brownies (that can be made vegan!), so these peanut butter swirl brownies are actually naturally gluten free!

However, these gluten free peanut butter swirl brownies are technically not considered Paleo, though they are grain free. This is because peanuts are considered a legume, not a nut. On the Paleo diet, most people avoid eating legumes, such as lentils, peanuts, and beans. I personally don’t have an issue with consuming any of these natural foods, and believe that peanuts, along with all legumes, can be integrated into my own life very healthily! Always consult your own doctor first 😉

So what makes these vegan peanut butter swirl brownies gluten free? Well, let’s get into the ingredients you’ll need!

Sweet Potato: this is the base of the brownies, like in my Paleo brownies and my Paleo vegan Nutella brownies! I used a big ol’ sweet potato for this recipe, about 10-14 ounces will do, and I used an orange one too! Bake your sweet potato prior to making this recipe. I have a whole guide on how to properly cook your sweet potato so that the sugars caramelize, yielding the sweetest and fudgiest brownies!

Coconut Flour: the next ingredient for making these gluten free peanut butter brownies completely grain free! Now, you can definitely swap in almond flour here, but since peanuts are technically not considered nuts, you can also keep this recipe tree nut free! Plus, there’s a lot of moisture in this recipe, and I feel that coconut flour does best to absorb it and give these healthy peanut butter brownies a good structure!

Maple Syrup: naturally, I mean, did you expect anything less?! I love my maple syrup! You can swap in coconut sugar if you’d like, but personally, I love using maple syrup 🙂 You can find a good organic brand at Trader Joes’ that’s also cost effective!

Ground Flaxseed: this is what helps to make these vegan peanut butter swirl brownies! Instead of eggs, we use 2 tablespoons of ground flaxseed mixed with water to create a ground flaxseed “egg.” I personally find flaxseed to be cheaper per serving than eggs, but if you don’t have access to flaxseed and aren’t specifically vegan, you can absolutely swap in 2 whole eggs for this recipe!

Peanut Butter: well, duh! You can’t have peanut butter swirl brownies without the peanut butter! Go for an organic brand if you can- Trader Joe’s has a great brand, as well as Whole Foods!

Vegan Butter: this is what makes the peanut butter swirl so creamy! I used a coconut oil based vegan butter, but feel free to use whatever you’d like! Using vegan butter keeps this recipe diary free while also creamy 🙂

Coconut Cream & Milk: another reason for the creaminess of the peanut butter swirl, I used coconut milk in the brownies (you can use the refrigerated version here if you’d like), and coconut cream (or coconut full fat milk) for the peanut butter swirl! However, if you want to stick with just one, you can use the coconut cream in the brownies as well!

To make these healthy peanut butter brownies, we first need to start off with brownie base.

Because these are grain free gluten free peanut butter brownies, they’re made a little different than how you would make your normal peanut butter swirl brownies! First start by pureeing your sweet potato in a large food processor.

Then add in the remaining ingredients: the cacao powder, coconut milk, coconut flour, maple syrup, flaxseed mixture, baking powder, baking soda, and sea salt. Puree again on high until it comes out nice and smooth like below.

Then pour your batter into a greased 9″ baking dish! You can use either coconut oil, olive oil, or another plant based oil to grease your dish 🙂

How to make the peanut butter swirl

Now, the peanut butter swirl is even easier than the brownies. In fact, it’s so easy, that you won’t even bother making regular brownies anymore, you’ll just always be adding that swirl 😉

After your brownie batter is in the dish, preheat the oven to 375F and prepare your peanut butter cream.

Using a hand mixer, beat the ingredients together until it forms a nice and thick peanut butter cream.

Then add a few dollops to the brownie batter and swirl lightly with a knife. Make sure not to swirl too much, or else it will just look like a muddy mess. Still will taste good, but may not be as swirly ha!

Then place your peanut butter swirl brownies into the oven and bake! Before you know it, they’ll be ready to slice and serve 🙂 I like to top mine with melted chocolate and crushed peanuts!

Or crumble up the brownies over vanilla ice cream, or peanut butter chocolate ice cream!

I hope you love these brownies as much as I do! Cannot wait to see your recreations of them on Instagram and Pinterest 🙂 Until next time, happy baking and swirling! 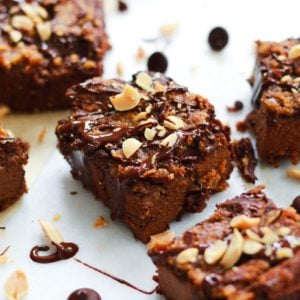 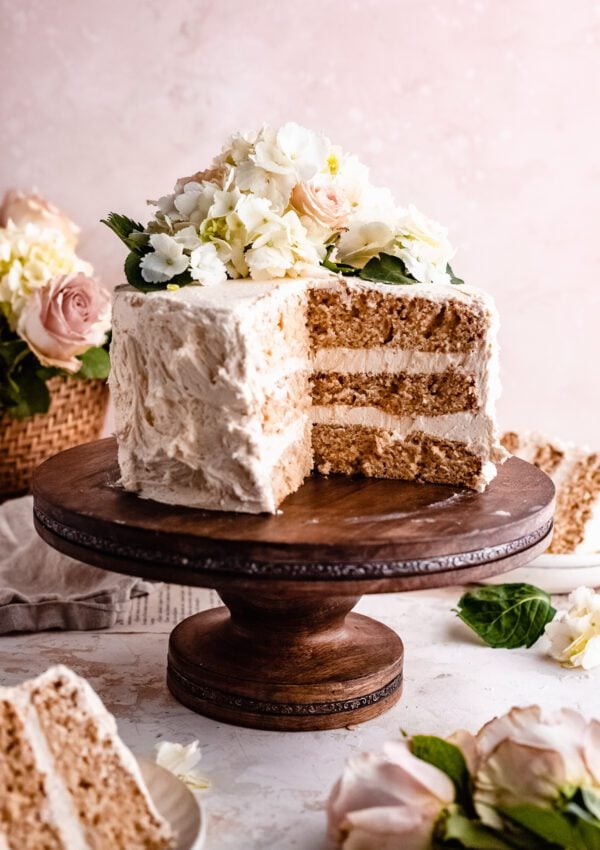 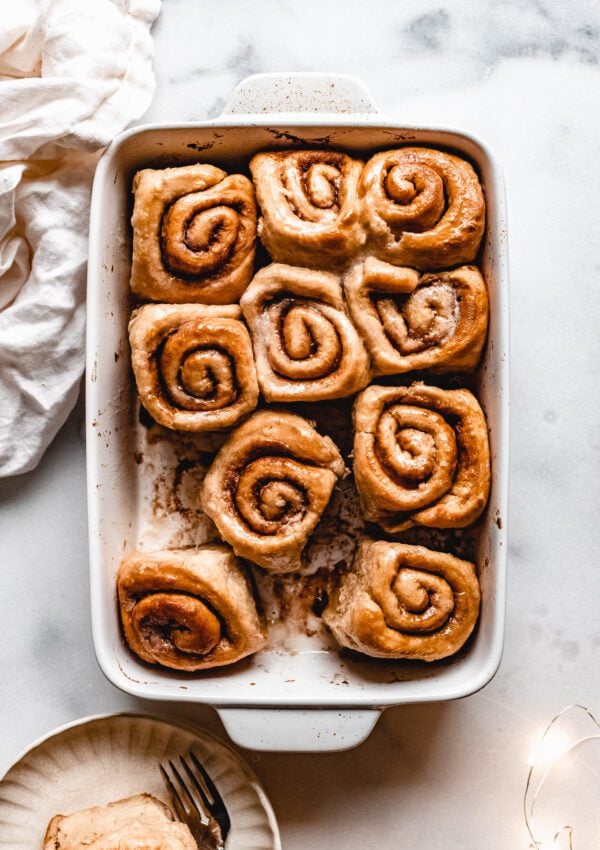 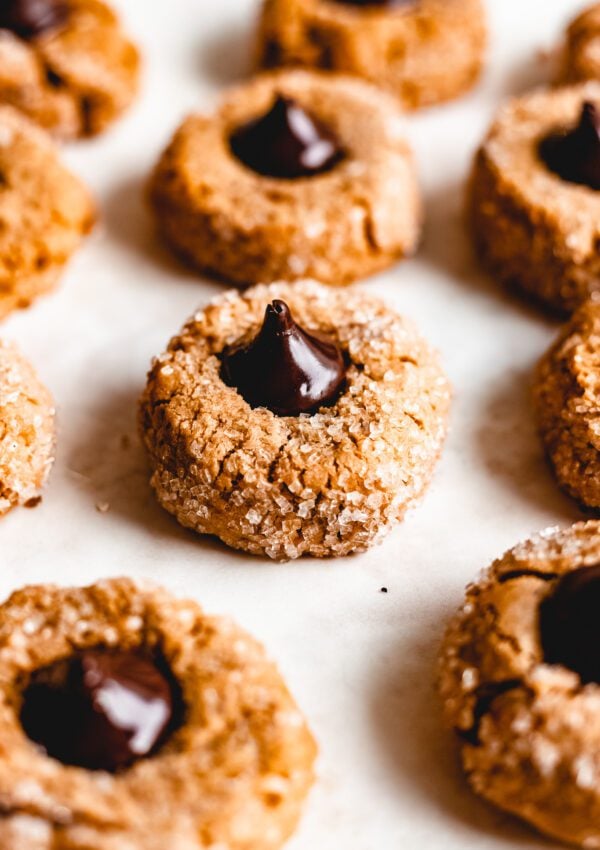 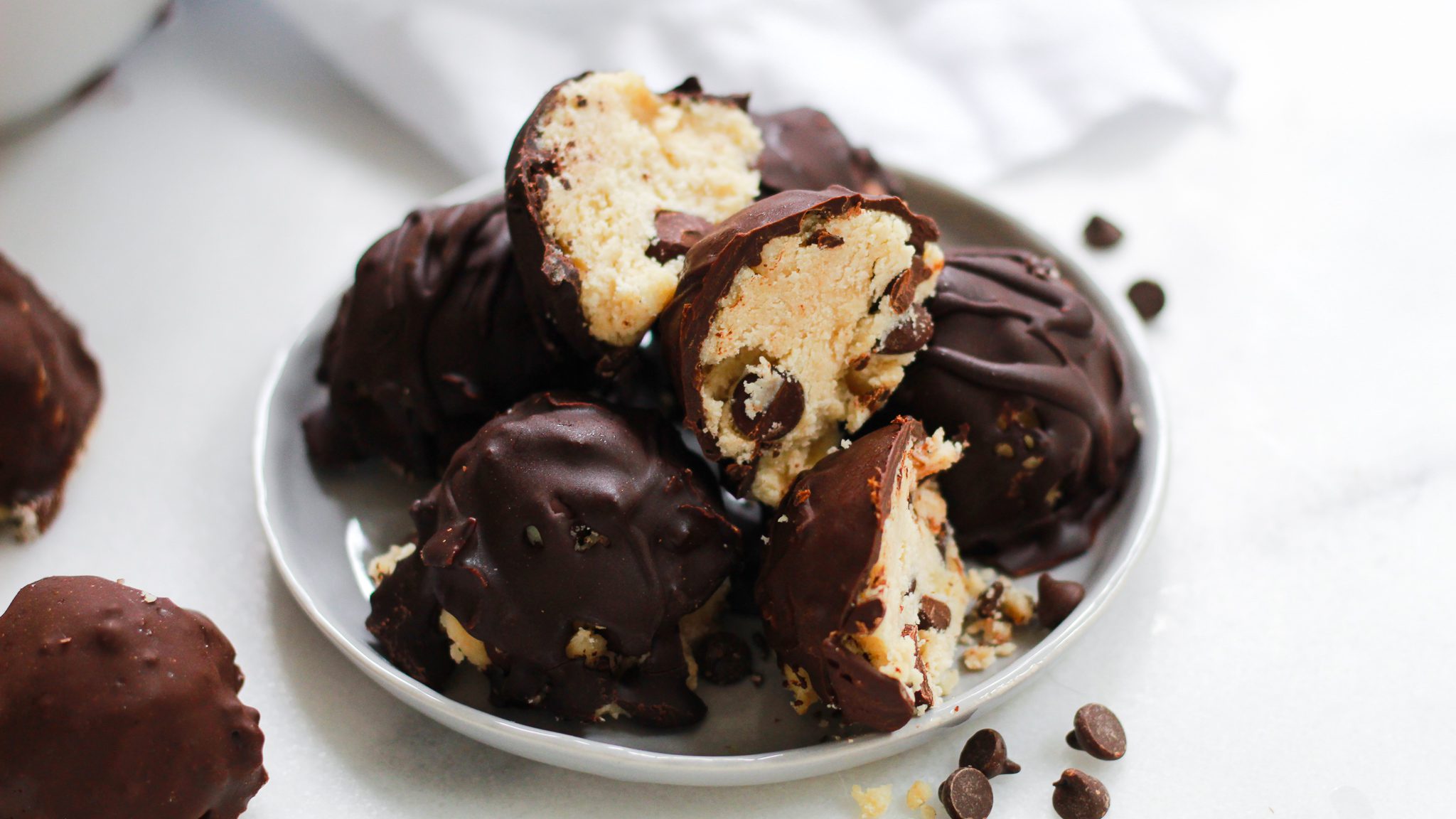