Deliciously sweet vegan sweet potato casserole made entirely dairy free, egg free, and gluten free with an option of being Paleo as well! One option is completely vegan with gooey vegan marshmallows and pecans, and the other is Paleo cinnamon pecan crumble! You’ll love this healthier twist on a classic Thanksgiving side dish!

If I had to pick one thing that I absolutely loveeee at Thanksgiving, it wouldn’t be the pumpkin pie (though I do love me some pie). It wouldn’t be the mashed potatoes and gravy. Not even the stuffing.

It would be the sweet potato casserole with marshmallows and pecans. Yes, I do enjoy dessert for dinner haha!

The secret trick? Baking the sweet potatoes. But we’ll get to that in a second!

In fact, both versions of this vegan sweet potato casserole are identical to anything you grew up with.

Oh, and yes, I did say both versions, because we have two ways to make this casserole! One version is completely vegan, while the other is both vegan and Paleo!

But rest assured, both versions of this vegan sweet potato casserole are deliciously caramelized with just a touch of maple syrup and the natural sugars from sweet potatoes, warm and spicy, and smooth and creamy to taste.

I’m very much a person who enjoys having options, so naturally I had to give you two of my favorites for making a healthy sweet potato casserole!

My boyfriend lovessss the streusel (he didn’t grow up with the more southern flair of sweet potato casseroles), while I loveeee the marshmallow and pecan topping, so naturally, we gotta make both for our Thanksgiving 😉

Luckily, the recipes are so simple, I really don’t mind at all!

Some people recommend steaming the sweet potatoes, but I say otherwise.

In order to get that sweet, caramel flavor, you’ll need to bake your potatoes beforehand. This is quite simple though. I have a whole guide here, in fact!

Quick Tip: just rinse your sweet potatoes, then place them onto tin foil and a baking tray. Place the tray into the oven at 375F for about an hour, and that should do it!

Now for the filling, which is super simple. In fact, you don’t need any machine or kitchen equipment really to do any part of this recipe, which is why I love it. Makes Thanksgiving verryyyyy easy.

To make the base of your vegan sweet potato casserole, just follow these steps:

That’s it! Now you get to choose between two toppings: making your sweet potato casserole with marshmallows and pecans or with a cinnamon streusel!

You can absolutely find vegan marshmallows these days, which is pretty cool. My personal favorite is a brand called Dandies. You can get them on Amazon or at Whole Foods. They taste just like a regular marshmallow.

For this topping, all you need to do is sprinkle the marshmallows and pecans on top, and bake! Simple enough, right?

So I have a whole separate recipe for my Paleo sweet potato casserole, but I gave it a much needed face lift, and a few tweaks to the recipe, which is why I included it here!

In the original recipe, I used tigernut flour, which- while Paleo- is hard to come by and very costly. For this vegan and Paleo sweet potato casserole recipe, I opted for cassava flour, which I know many still may not be as common as, say all-purpose flour, it is a fantastic grain free flour that is around the same price as a high quality regular flour.

For the streusel topping, you’ll need to:

Pretty cool, right? This Paleo sweet potato casserole is truly one of my faves. Nothing beats marshmallows for me (it’s from my childhood, I just can’t!), but this is basically neck and neck with it, if that tells you anything 😉

Quick Tip: if you don’t need grain-free but would like to use the cinnamon streusel topping instead of marshmallows, you can easily swap in either all-purpose flour or gluten-free 1:1 baking flour here at a 1:1 ratio to the cassava.

Can I make sweet potato casserole ahead of time?

Thanksgiving dinner is definitely a marathon, not a sprint. I typically prepare this dish right before we’re about to eat, but you can definitely prepare it earlier in the day or even the day before.

Can you freeze sweet potato casserole?

Then when you’re ready to bake, remove the casserole base from the freezer, and allow it to thaw overnight in the fridge. This will save you some time during the Thanksgiving prep, which, hey, any saved time is valuable during this holiday shuffle!

Well, truthfully, I’ve never had this problem on Thanksgiving, because if there are any leftovers of sweet potato casserole, I’m calling dibs on it that night haha!

Buttttt with the recipe testing with this one, I did indeed have some leftovers!

To reheat your vegan sweet potato casserole with either the marshmallow pecan topping or the streusel, simply preheat the oven to 325F. Spoon however much you want to reheat into a baking dish and cover with aluminum foil.

I hope you love this healthy sweet potato casserole as much as I do! It’s truly one of my favorite side dishes for Thanksgiving. And now you have options, which, who doesn’t love options?!

Heck, you could even make both toppings if you felt like it!

If you make this sweet potato casserole, let me know down below in the comments section! And of course, I absolutely love to see your beautiful creations, so be sure to tag me on Instagram and Pinterest when you make it!

Deliciously sweet vegan sweet potato casserole two ways! One option is completely vegan with vegan marshmallows and pecans, and the other is vegan and Paleo! You’ll love this healthier twist on a classic Thanksgiving side dish!

To make nut-free: swap out the pecans for pumpkin seeds, and make sure you’re using nut-free dairy-free milk. 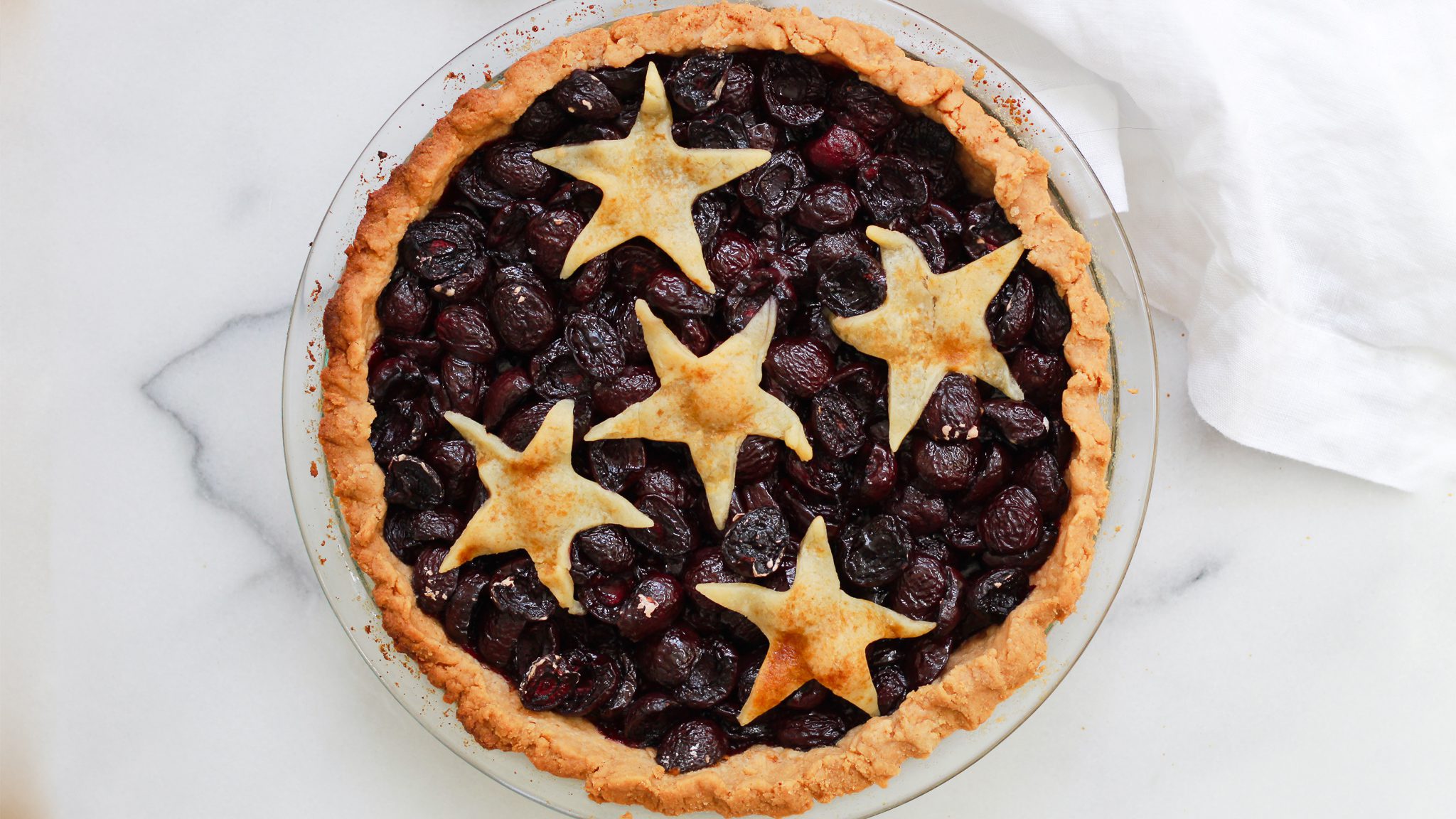 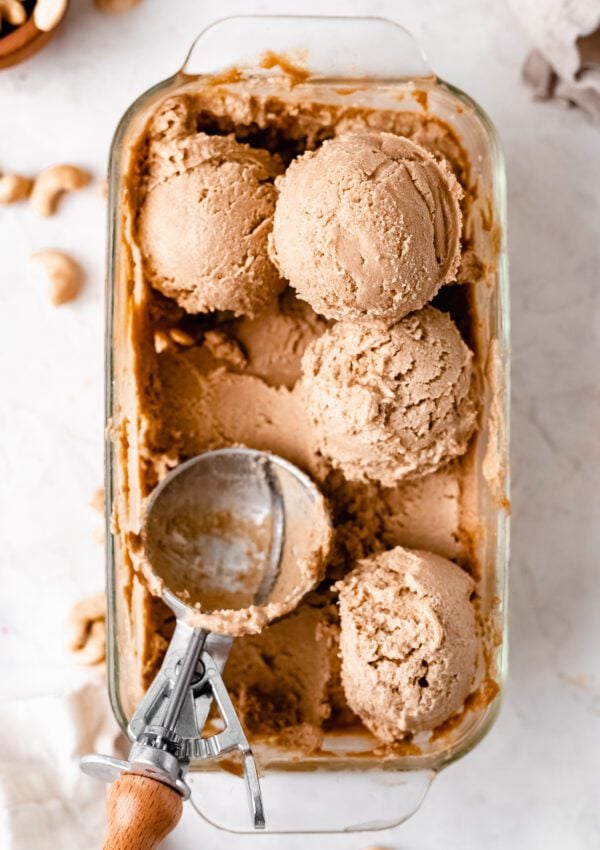 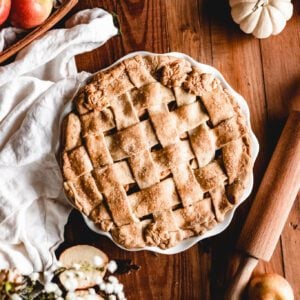