This vegan pizza dough is quick and easy to make, with the most perfect crust, and tons of unbelievably vegan pizza toppings, including the best melty gooey vegan cheese! Options for both grilling the pizza and freezing the dough for later too!

This is the ULTIMATE vegan pizza recipe

I love ordering in pizza as much as the next gal (Colony Grill is my absolute fave, thanks to the fact that they have a vegan pizza option!). But to be honest, other than Colony, not many pizzerias have vegan pizza options.

So what do we do? We make our own vegan pizza! It’s honestly SO easy. You are just going to love this super easy vegan pizza recipe, and I think you’ll be shocked out how good it is!

We have a perfectly chewy crust that’s flavorful and soft on the inside but tough on the outside to hold up all of your toppings. Then I’m going to share a few of my favorite topping options, as well as a recipe for the pizza I made in the first picture!

And this pizza goes great with a side of vegan focaccia (or gluten free focaccia!) as well- or serve it with a bowl of Tuscan white bean sou!

Now, there are different styles of pizza, but we’re going for a medium crust that’s slightly chewy. Then we top with fresh pizza sauce, cheese, and bake!

I actually learned how to make pizza from my great grandpa, who’s Sicilian. While this vegan pizza recipe isn’t a true Sicilian pizza, I tried to keep as close to what my great grandpa taught me as possible!

The verdict: my grandmother, his daughter, said that this vegan pizza was honestly one of the best pizzas she’s had. She didn’t even think I used vegan cheese ha (that’s how good vegan cheese can be these days!)!

Often times, pizza dough is naturally vegan. The basic pizza dough formula is just water, flour, yeast, and salt. The only times that eggs or dairy are used for a bread recipe is typically just for enriched doughs (like brioche or cinnamon rolls– which we have the vegan options for on the blog!).

Ingredients for a vegan pizza dough

As we just mentioned, the ingredients for a pizza dough in general, is so simple.However, since we’re making a vegan pizza, we’ll keep the rest of the ingredients vegan and dairy free as well!

Vegan pizza dough is made from:

For the pesto tomato white bean vegan pizza I made in the photos, the ingredients you’ll need are:

My favorite kitchen tools for this recipe: 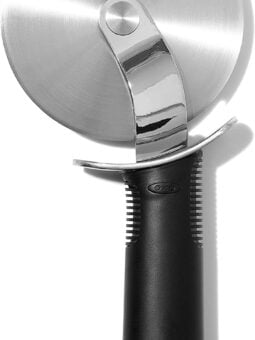 How to make the best vegan pizza recipe from scratch

Making a homemade vegan pizza is actually quite simple! It’ll give you a bit of an arm workout, but totally worth it because this vegan pizza dough comes out incredibly.

First I’ll walk your through making the dough, and then we’ll go over how to shape the pizza, top it, and bake. There’s even an option for a grilled pizza if you want more of that “fire” taste to the pizza.

As always, the full written instructions for this pizza are found down below in the recipe card. However, let’s go over the basics here!

Making a pizza dough is super simple, and honestly easier than making cinnamon rolls or even bagels. The reason being is that we only need 4 ingredients, and the whole process actually goes pretty quickly.

I make my pizza dough without any sugar. Not that adding sugar is bad, but I just don’t see the need for it when the yeast can be bloomed with just flour.

The most important part here where a lot of people slip up is not using the proper temperature water. Your water should be heated to 110F, which will feel warm-hot, but it’s best to use a kitchen thermometer. Too cold, and the yeast won’t bloom, which means the dough won’t rise. Too hot, and the yeast won’t work at all. Here’s a great video on how to activate yeast the right way for pizza dough.

You can also make this pizza by hand or by using a stand mixer. I’ve made dough for years just by hand, and only recently acquired a stand mixer, so it absolutely works! Your pizza will be just as amazing.

How to shape pizza dough

Contrary to popular belief, you don’t need to toss the pizza dough in the air like you see in the movies (though yes, professionals will do that ha!). But since we’re mostly beginners to intermediate chefs, we actually don’t have to toss the dough into the air in order to achieve the round shape (or square if you want a true Sicilian pizza!).

We’ll start to shape the dough after you’ve proved the dough.

Do not use a rolling pin, as this will deflate the dough, causing it not to rise when you bake it! I simply start by dividing the dough in two (it makes it easier to bake in my oven, but you could make one extra large pizza!). I then form a flat disc with one of the dough balls.

Now, start to press the dough out with your fingers, in a circular shape, being mindful of where your crust is forming on the outer edges. Begin to gently turn the dough in a circular motion as your stretch it out to about 12-16″ in diameter, depending on how big your dough ball is.

And there you go! You’ve shaped the pizza dough!

Once you’re ready to bake your pizza, spread the tomato sauce around the dough, just until the edges. Top with cheese, and place the pizza onto a pizza tray and into the oven to bake for 10-12 minutes at 475F.

Remove from the oven, top with fresh basil, and serve!

How to grill a pizza

If you choose to grill, simply start your grill how you normally would and let it heat to about 500F. Arrange all of your toppings ready to go on the side of the grill (this part just takes being prepared!). Lightly brush your vegan pizza dough with a little olive oil on both sides and slide the dough onto the grill.

Flip the dough after about 2-3 minutes and grill on the other side. Then flip the dough back over and onto the parchment paper, and top with sauce and cheese (saving the basil for when you serve). Slide the simple vegan pizza back onto the grill and cover to let cook for about 2-3 minutes. If your cheese didn’t melt (it’s happened to me once or twice, and it’s because too much time passed between lifting the cover of the grill!), you can place your pizza into an oven at 475F for about 5 minutes to melt the cheese! Then just serve and enjoy 🙂

What vegan cheese should I use?

I personally love my bean-based vegan mozzarella. It’s so quick and easy to make, with just a few simple ingredients. And really tastes like mozzarella cheese!

For store bought, the best vegan cheese to use for a vegan pizza is Forager Project, but I also love Violife! These brands I recommend for a few reasons. Both of these dairy free cheeses melt wonderfully, like real cheese, and both dairy free mozzarella versions come very close to the actual flavor of mozzarella (making this an ideal choice if you’re making this pizza for any vegan skeptics!).

The one thing to keep in mind: if you’re nut free, then go with Violife. Forager Project is awesome, but contains cashews. Violife is just as amazing!

What can you use instead of a pizza stone:

So most of us don’t have a masonry oven, but that doesn’t mean we can’t make a great pizza at home! If you don’t have a pizza stone, you can use:

Want to make a pizza that’s not just cheese? No problem! Here are some ideas for different vegan pizza recipes other than cheese:

How to freeze pizza dough:

The best part about this vegan pizza dough recipe: you can make two big pizzas from it, and freeze half of the dough!

To freeze your pizza dough: the most important part is that you’re done through the fermentation process, meaning the rising process.

Then you can top and bake your vegan pizza!

I just know your vegan pizza is going to come out amazing! If you make this recipe, please be sure to leave a review and rating ⭐️⭐️⭐️⭐️⭐️. This helps others to find the recipe!

As always, I absolutely love to see your beautiful creations, so be sure to tag on Instagram and Pinterest!

How to make Focaccia

This vegan pizza dough is quick and easy to make, with the most perfect crust, and tons of unbelievably vegan pizza toppings, including the best melty gooey vegan cheese! Options for both grilling the pizza and freezing the dough for later too!

Recommended store bought vegan cheeses: the cheese you choose will be a big determinant as to whether your pizzas turn out great! I recommend Violife shredded mozzarella, as shown, or Miyoko’s Mozzarella Balls. Violife is nut free and soy free, and Miyoko’s contains cashews.

For other vegan topping ideas: See the blog post!