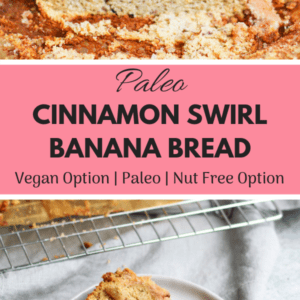 It’s finally here! My favorite new version of my paleo banana bread: the paleo cinnamon swirl banana bread! Using minimal flour (only 1/2 cup of coconut flour!) and only bananas as a sweetener, this bread is my all time favorite.

I absolutely love how sweet and gooey and fluffy the bread is, especially with a slather of almond butter on top! It’s my new favorite breakfast, but it could totally go for a snack as well!

It’s so good, you’re going to want to share with others but at the same time, totally not want to share because you want this paleo cinnamon streusel banana bread all to yourself 😉 I don’t blame you!

It’s the perfect balance of warming and sweet, a treat everyone will just love.

Well, it all started with my original Paleo Banana Bread recipe! It is indeed my favorite banana bread recipe, and it got so much love on Instagram, that I decided to continue with some spin offs!

So let’s get down to the ingredients for this paleo cinnamon streusel banana bread!

Banana: putting the banana in paleo cinnamon swirl banana bread haha! For the bread, just like in my original recipe, we’re using just bananas as sweetener! Mash the banana really well with either a fork or blending them. I recommend using really ripe bananas for this, as it is the main sweetener. You have permission to let them brown on the table for a bit haha!

Coconut Flour: used as a way to absorb a heck of a lot of moisture in this bread, coconut flour is a great ingredient! I wouldn’t recommend subbing it for any other flour, as I have not personally tested this. However, if you’re feeling bold, by all means give it a go and report back here!

Almond Butter: there is no oil or butter in this recipe- it’s completely dairy free! So I like to use smooth almond butter to act in place of the oil or butter in traditional recipes. Just a little goes a long way! You can also use another nut butter if you’d like, or if you’re nut free, swap in a seed butter! No harm there!

Eggs: for this recipe, I used 3 large eggs, all at room temperature. I haven’t tried my original recipe with a ground flaxseed egg yet, but I would imagine it would have similar results. The only time I’ve tried this was in my paleo vegan double chocolate banana bread, so if you’re interested in a vegan version, go check that out!

Maple Syrup: like I just mentioned above, the maple syrup only goes into the cinnamon streusel topping, and let me tell you: it is GOOD. I find that the maple really complements the warming notes from the cinnamon, and is pretty low on the glycemic index! I just love maple syrup, it’s such a staple sweetener in all of my baking and dessert recipes!

How to make the paleo cinnamon streusel topping:

One of my favorite parts, this just pulls everything together! You first start by melting the coconut oil until it basically becomes a liquid.

Then you mix in the maple syrup and cinnamon. Give it a good stir, and voilà! You have yourself a paleo cinnamon streusel topping!

I then layered it over half of the banana bread batter and then again on top. Topped with a few banana coins and placed it into the oven!

I like to make sure that almost everyone can enjoy my recipes, so I want to keep in mind the people that may have nut allergy! A lot of vegan and paleo recipes are often laden with a lot of nuts, making it impossible for someone who’s allergic to nuts to actually be able to enjoy the recipe.

That’s not the case here!

If you have a nut allergy or are avoiding nuts in general, you can absolutely swap in either a seed butter or coconut butter in place of the almond butter. That’s the only nut product used in this paleo cinnamon swirl banana bread!

If you’re short on an ingredient in this recipe, or any recipe, feel free to check out my free ingredient swap guide that you can download by signing up below! Once subscribed, you’ll get access to the password that unlocks my free resource library and you’ll get notified when new guides are added to the library each week!

I hope you love this banana bread as much as I do! Happy baking!