Before going vegan, the only cheesecake I actually enjoyed was a New York style cheesecake. It’s so much creamier than regular cheesecake, and has the most irresistible crust.

Well, we have it, folks.

This is my all time favorite baked vegan New York style cheesecake that’s ultra creamy and decadent yet doesn’t weigh you down. It’s slightly tangy with notes of vanilla, and is undetectably gluten free with the sweet oat crust.

This cheesecake is baked to perfection, with that classic fluffy and soft texture, just perfect when topped with some amareno cherries and fresh coconut whipped cream!

What’s the difference between New York cheesecake and baked cheesecake?

You might be wondering what’s really the difference between a New York cheesecake and a regular baked cheesecake.

New York style baked cheesecakes also have the addition of heavy cream and more sour cream (not to mention more cream cheese) than a regular cheesecake.

Of course, in our case, the heavy cream is actually coconut milk and the sour cream is vegan! Yes, there is a vegan sour cream, and I talk about that in the recipe card, so don’t worry!

Before beginning, make sure that you have:

How to make a baked vegan cheesecake (EASILY!)

A water bath is really quite simple, and we go over how to make one

In terms of ingredients, we’re keeping the tradition of incorporating both cream cheese and sour cream into this vegan cheesecake…only, ya know, dairy free 😉 For this vegan New York style cheesecake, you’ll need:

Please keep in mind that the full ingredient measurements are found down below in the recipe card. This is just a summary! Next we’ll go over how to make this baked vegan cheesecake.

I could eat this crust by itself, it’s so good! Plus it’s so easy and really quick to make. A quick trick for softening your dates in just 10 minutes:

Simply pulse the oats into a flour in your food processor. Add in the vegan butter along with the dates, and pulse again until it forms a dough.

Press the dough into your prepared springform pan and bake the crust on a baking sheet to par-bake it.

Remove from the oven and set aside so we can prepare the creamy vegan cheesecake filling!

Again, I could eat this filling with a spoon, and it’s just as simple as the crust. No need to soak any cashews or anything. The only thing you need to make sure you’ve done is allow both the cream cheese and sour cream to come to room temperature so that they’re easy to cream.

Cream together the cream cheese and sour cream until smooth. Then add in the coconut cream, maple syrup, vanilla, and arrowroot. Pulse again until smooth, then pour the filling over the crust.

Create the water bath for the cheesecake. Please watch the video on how to do this, and check out Handle The Heat’s Water Bath tecnique article.

Once your water bath is made, bake in the oven! You’ll notice that the cheesecake is really wobbly and won’t seem done, even though the top has formed a “crust” almost. This is completely normal. Vegan cheesecakes often don’t look fully done, because the arrowroot starch needs to cool in order to set everything.

You’ll also notice that the top of the cheesecake might look lightly golden. DO NOT WORRY! Your cheesecake isn’t burnt. In fact, the cheesecake will lighten up during the cooling process. It’s the coolest part about this vegan cheesecake!

Do I really need a water bath for my cheesecake?

The answer is yes, you do need to use a water bath for a baked vegan cheesecake, especially if you want the texture of a classic cheesecake. The reason being is that cheesecakes love moisture, and a water bath helps to create a really moist environment in the oven, which typically runs dry.

If you were to not use a water bath, your cheesecake would come out super dry, like a block of cheese. Not fun, nor pleasant to eat. Trust me, making a water bath for the cheesecake is not as difficult as it seems! The only part you need to really make sure you do right is wrapping the bottom of the cheesecake and the walls in tin foil. This will prevent any water from leaking into your cheesecake.

While I want to emphasize that this baked vegan cheesecake is extraordinarily easy, that doesn’t mean we can get sloppy with technique! Here are a few tips to make sure that your vegan New York cheesecake comes out perfect every time:

You are just going to LOVE this baked vegan New York style cheesecake as much as I do! This New York cheesecake is:

If you try it, make sure to leave a comment and a review ⭐️⭐️⭐️⭐️⭐️ so that others may find this recipe!

Arrowroot Starch: make sure that your arrowroot starch (also called powder) is stored properly and is still active. Improperly stored or expired arrowroot will not work. You can also swap in an equal amount of cornstarch.

Sour cream: Currently the only dairy free band I know that sells a vegan sour cream is Forager Project, which is what I used here. I’ve also tested this with plain unsweetened coconut milk yogurt, and got very similar results!

Maple syrup: if you don’t want to use that much maple syrup (it is a lot, I totally get that), you can swap in 3/4 cup regular sugar or coconut sugar. Keep in mind that using coconut sugar will make this cheesecake look caramel in color rather than cream colored.

Water bath: using a water bath is extremely necessary for this vegan cheesecake recipe. Water baths are the key to a super fluffy and soft cheesecake that doesn’t dry out or crack in the oven. To make the tin foil wrapping and prepare a water bath correctly, we show you how in the below tutorial. However, Handle The Heat has a whole article on how to create a water bath, so please read that as well if this is your first time making a water bath for a cheesecake.

Please read the above blog post for all tips & tricks on how to make this baked vegan cheesecake, as well as watch the quick YouTube tutorial! Thank you! 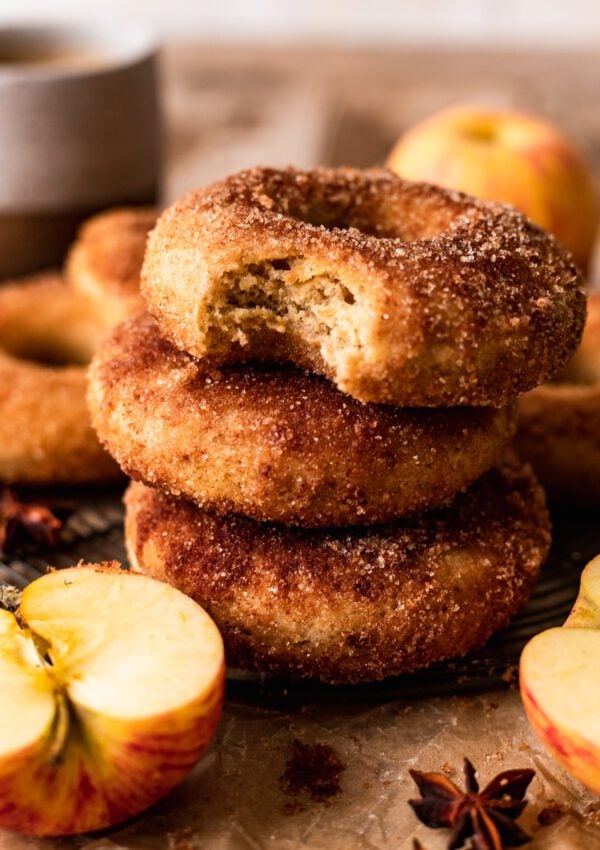 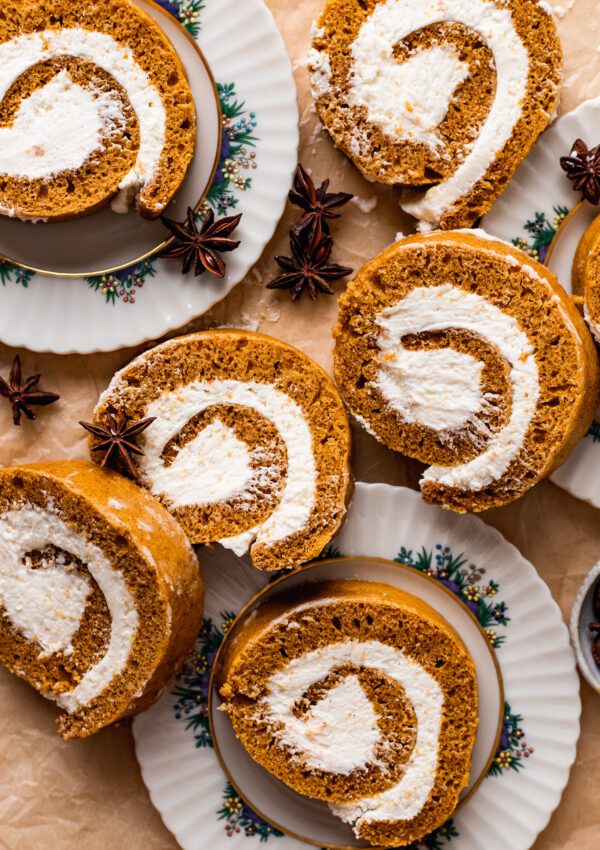 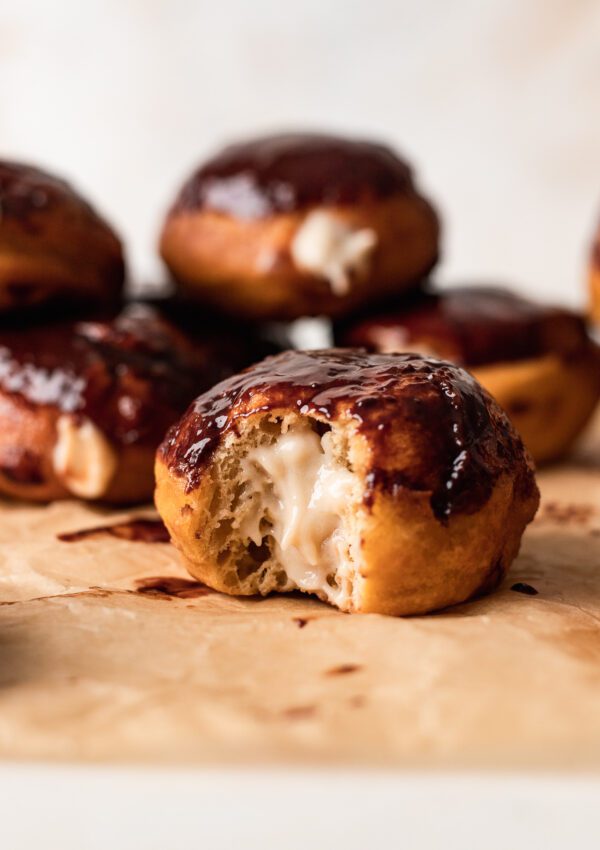 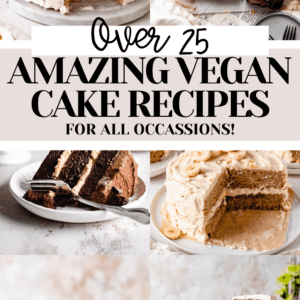