One-bowl paleo pumpkin donuts with a sweet potato frosting that is sugar-free and vegan!

So about two weekends ago, Jared and I decided to travel all through Williamsburg, over the bridge (thanks to the L train being shut down!), and to Donut Plant to try some of their amazing donuts. We got a pumpkin spice, an apple spice, and a marcona almond donut- two people, three donuts, seems about right! Ha!

Needless to say, they were heavenly, and I’ve been thinking about them ever since, so I needed to make even more donuts to satisfy that craving! But, seeing as I’m super lazy during the week and just want things to be one step, I decided there were probably more people in the world like me that could use a super simple recipe that still tastes amazing!

Yep, they’re just one bowl, one blender, and one pan! All you need: 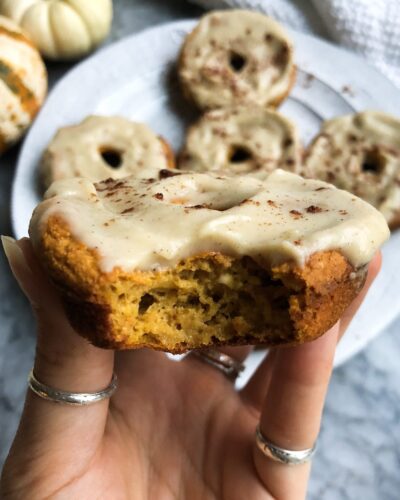 One thing that I noticed about the frosting is that it blends much easier when the sweet potato is still slightly warm (also helps to melt the coconut butter!). It’s also a great frosting that can be used as icing on pumpkin brownies or even as a “syrup” on coconut milk or banana ice cream! I’ll probably be adapting some form of it to make as a whipped cream to go on top of my paleo vegan pumpkin pie that I make every year for Thanksgiving!

Anyways, back to work for me! Enjoy, and happy Wednesday!

Did you like this recipe?! If so, let me know by sharing it on Instagram, commenting down below, or pinning it to your recipe page on good ol’ Pinterest! Be sure to tag me @the_bananadiaries and use the hashtag #iyamlove so that I can see your beautiful creations!