Red velvet cake is high on the list of my top favorite cake recipes, especially this vegan version. When I used to work at Georgetown Cupcakes, the red velvet flavor was the best selling out of all flavors, even chocolate.

It’s a classic for a reason.

So when thinking of a few holiday recipes, I realized I don’t have a vegan red velvet cake with cream cheese frosting! Basically everyone’s favorite cake, I mean, come on now!

It’s a wonderful celebration cake for holidays, such as Thanksgiving and Christmas, but not just those holidays: make this veganized vegetarian version of red velvet cake for Valentine’s Day, a birthday, graduation, engagement party, weddings, and more!

Plus this cake is naturally vegan, can be made gluten free, and certainly doesn’t taste like either.

Trust me, it’s so velvety and rich, everyone will be going back for a slice! They won’t even question it!

What is red velvet cake? What does it taste like?

People just can’t get enough of that red velvet! Now, in a good red velvet, you’ll have a very smooth, velvety texture thanks to the acidity, and with a slight tang to the sweet, it’s easy to just keep eating it!

And if you want to make it completely refined sugar free, there’s an option for that! Just please not that the color will definitely be more brown than white in the frosting, and the cake will look more purple than red.

Aside from the basics of making a cake veganized, the tricky part when it comes to making a vegan and vegetarian red velvet cake is actually in the food coloring.

Most food colorings contain a red that is actually not vegan.

However, there are some ways around this so that we can keep this healthier red velvet cake completely vegan.

I like to use a high quality plant based red food dye that I find at Whole Foods. I also know that the Wilton produces a vegan-friendly red food coloring gel that makes the most beautiful red hue. Wilton also doesn’t test on animals, which I think is a nice added note to make you feel good about purchasing!

I recently found a brand called Nomeca, found on Amazon, and they are entirely vegan. They also have a bunch of fun colors, like sunset yellow and pink that I’ve been using for cookie decorating! The best part? They don’t fade 🙂

Another option is using beet powder. Now, my only note here is that your red velvet cake might look more maroon rather than red, since beet powder isn’t pure red. However, the taste will still be amazing.

What’s the difference between red velvet cake and chocolate cake?

There’s only a smidgen of cacao powder in red velvet, whereas with chocolate cake, you’re talking a whole lotta chocolate.

In fact, when red velvet cake was first made, it actually had way more cacao in it. However, the amount lessened over time, and the color became more red than maroon.

This vegan red velvet cake is very different than my vegan chocolate cake, so rest assured, you’re getting an entirely different flavor profile between these two recipes!

What is the flavor of red velvet cake?

I really don’t think that any red velvet cake recipe tastes chocolatey! There’s such a small amount, but it is necessary for that slight richness in my opinion.

But actually, red velvet cake gets its name from the vinegar creating that velvety texture in the cake. It’s truly unlike any other cake I’ve ever had. There’s a slight tang to it, but trust me, it’s not gross.

You’re going to fall in love with this cake!

Making this healthier red velvet cake is seriously a breeze, and you can decorate it however you want! I’m going to walk you through the basic steps for getting your cake baked and frosted, then let yourself have fun with the decorations 🙂

I used my vegan gingerbread cookie recipe to make reindeer and Christmas trees, but feel free to use whatever you like!

I know sometimes it’s intimidating if you’re making a vegan cake for the first time, but I promise, it’s actually so similar to making a regular cake! So don’t sweat it: just trust the process!

That’s it! Not too far off from making a regular red velvet cake, right?

Making a vegan cream cheese frosting is, like making a vegan cake, just as easy as its conventional counterpart. The only difference is that it’s completely dairy free!

Next, you’ll want to make sure that the vegan cream cheese and the vegan butter are at room temperature, but still cool. This means that they’ll be slightly soft, enough for you to effortlessly dent a fingerprint into it, but still cool enough to work with without it melting.

Then, you’ll just make the frosting like you would a regular cream cheese frosting. Beat together the vegan cream cheese and butter until they’re whipped and fluffy.

Add in the powdered sugar in increments until it’s a fluffy frosting. Then finish with a little vanilla beaten into the frosting and there you have it!

Now you can frost your cake in layers! Make sure you level your cakes before beginning. I recommend using a frosting knife and bench scraper to get the cleanest look that will almost resemble fondant (but without the icky fondant taste!).

If you want to decorate with gingerbread cookies, feel free to! Or make your own decorations: tree brands, holly leaves, or even crumbled up extra cake layers after you’ve leveled them!

I recommend storing any leftovers in a cake container or sliced and placed into an airtight container. The cake will last for about a day or two on the countertop, but you can also store it in the fridge for up to 4 days.

I hope you love making this vegan red velvet cake as much as I do! And I hope you enjoy eating it even more 😉 If you make this cake, let me know down below in the comments section, and be sure to give it a rating so that others can see!

As always, I love to see your beautiful creations, so be sure to tag me on Instagram and Pinterest!

The Best Vegan Vanilla Cake I’ve Ever Had

If using coconut sugar: your cake will look more tan/brown than red, even with using the vegan food coloring, but it will still taste delicious! 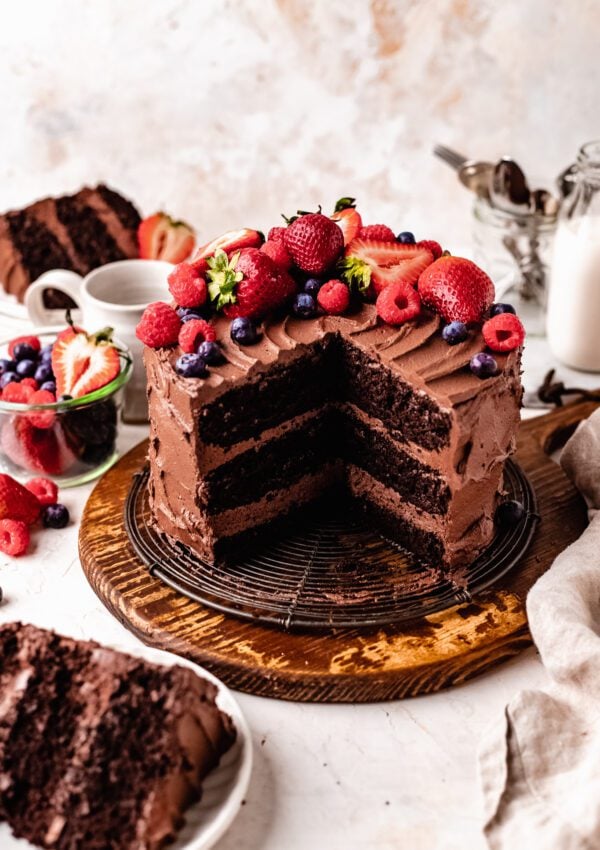 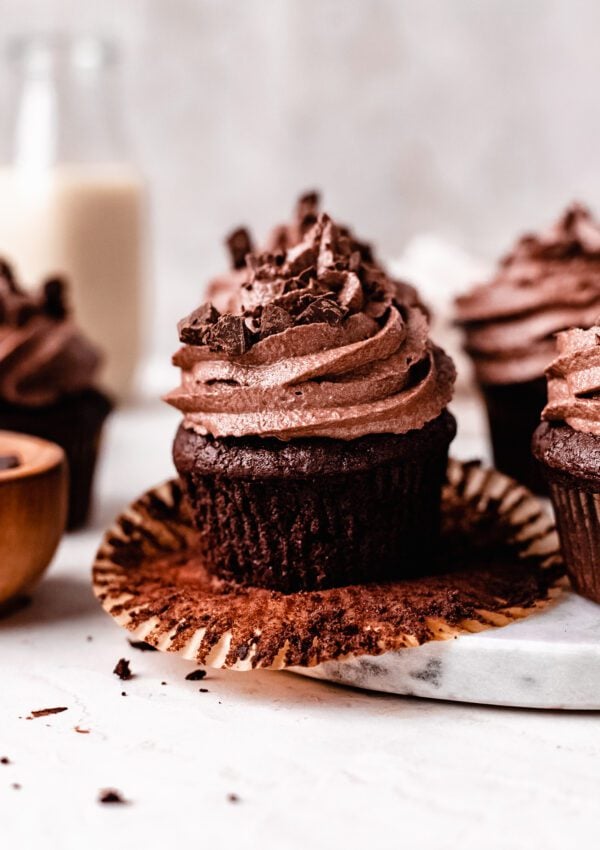 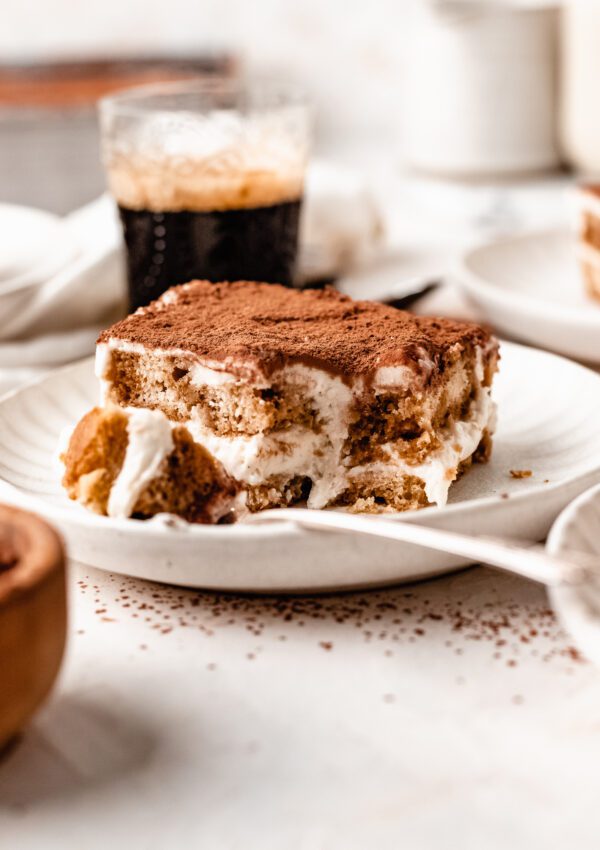 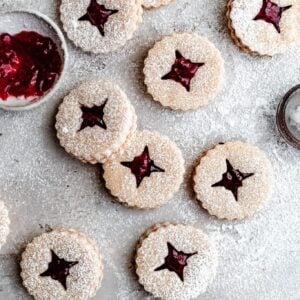