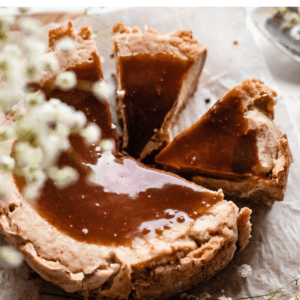 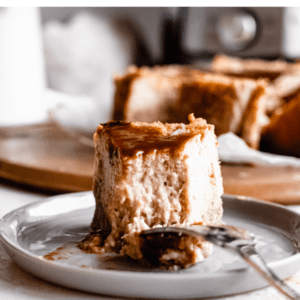 I absolutely love a good baked vegan cheesecake recipe, but recently I’ve become obsessed with my new favorite kitchen tool: the Instant Pot (which I often experiment with and show on IG stories!).

So I decided, let’s make a vegan cheesecake in an Instant Pot.

That’s a thing, right? I did some perusing on Pinterest, and it turns out, people really are as in love with the IP as I am!

So instead of the raw vegan cheesecakes you’re used to seeing on here, let’s take it up a notch and give you the ultimate baked vegan vanilla cheesecake that’s so incredibly easy!

What I love most about this baked vegan cheesecake is that it is:

It’s true: a slice of this healthier cheesecake is light & refreshing rather than making you feel like you have a rock in your stomach!

For this vegan vanilla cheesecake, you’ll need the following:

That’s honestly really it! It’s a really simple, plant based vegan dessert that’s as easy to make as it is to eat!

How to make a baked vegan cheesecake in an instant pot

Now that we’ve gone over ingredients, let’s go over how to actually put everything together so that you have an incredibly delicious, smooth and silky baked vegan cheesecake!

To start, you’ll prepare the crust first by combining all of the crust ingredients in a food processor.

Press the dough up the sides of a parchment-paper lined springform pan (I use a 6″), and place the pan into the freezer to chill while you prepare the filling.

To prepare the filling, pulse the cashews with the coconut cream until smooth. Then add in the remaining ingredients and blend until everything is combined. Pour the filling into the chilled crust and get ready to use your instant pot!

Baking a vegan cheesecake in an instant pot is actually quite simple. You’ll need to use the metal trivet provided, as well as some tin foil to wrap your cheesecake.

Program your Instant Pot for “cheesecake” then set it to 35 minutes and press start.

Allow your cheesecake to “bake” then when it’s finished, release the valve to allow the pressure to release. Once the pressure is completely released, remove the lid and carefully remove the cheesecake with oven mitts from the Instant Pot.

Allow the vegan cheesecake to fully cool for a few hours before serving, and enjoy!

What size springform pan do I use for an Instant Pot?

This recipe in particular is scaled for a 6″ or a 7″ springform pan.

What if I don’t have an instant pot?

Not a problem at all! If you don’t have an instant pot, you can easily bake this vegan cheesecake in a water bath within your oven.

How to make a water bath for a vegan cheesecake

To do this, you’ll need a regular baking sheet or pan with edges and your springform pan (make sure it fits into the baking sheet/pan).

Line the baking sheet with a clean dish towel (this prevents the vegan cheesecake from sliding around in hot water while baking), and pour water into the pan about halfway up the walls of the pan.

Place the cheesecake into the springform pan and carefully place it into the oven.

How long to bake a vegan cheesecake

Bake the vegan vanilla cheesecake for 40-50 minutes at 350F. To see if the cheesecake is done, the edges should be completely set and the middle might still be slightly jiggly but it should not look underdone whatsoever.

Remove your cheesecake carefully from the oven (because the water will be extraordinarily hot. Then allow your baked vegan cheesecake to cool for 2.5-3 hours!

Of course, you can enjoy a slice just as is, but let’s take it up a notch with any, some or all of these:

I hope you love this vegan cheesecake recipe as much as I do! If you make it, be sure to let me know how it goes in the comments section below, as well as giving it a rating so that others can see.

If you don’t have an Instant Pot, please follow these directions for baking: